← Michelin Star – What is the difference?
English Winter Soup →

Arusuvai is a beautiful friendship chain  to bring together blogger and non blogger. A secret ingredient is mailed and all you have to do is create a dish from it. This was originally started by Bharathy of Spicy Chilly, Srivalli of Cooking 4 all seasons and Lathamma of The Yum Blog. Now the second season is organised by Sayantani of A Homemaker’s Diary. 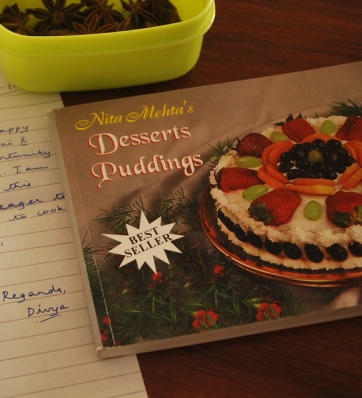 I received my first secret ingredient from Divya Kudua of Easy Cooking. Along with the ingredient; I also received a hand-written letter and a book – Dessert Puddings by Nita Mehta.Frankly, I’ve never used this ingredient nor did I know the name of it.I had a hunch that it was used in preparation of rice items like biryani or pilaf but I wasn’t sure. I googled first for garam massala and tried to match the image with the ingredient  and finally I found that it’s called ‘Star Anise’.

Star anise is the almost ripe, dried, star-shaped multiple fruit of the star anise tree (Illicium verum), which is a member of the magnolia family (Magnoliaceae). The small, red-brown, star-shaped fruits contain 6 – 8 unevenly sized, boat-shaped individual fruits 12 – 17 mm in length, each containing a glossy brown, egg-shaped seed. It has a more powerful, pungent and strong flavour when compared to other spices.Whole stars can be used as such or they can be grounded as well. A note to keep in mind, because of its powerful flavour, only small amounts are used.This spice is widely used in Chinese cuisine, and to a lesser degree in South Asia and Indonesia.
This is my first experience with the spice and I wanted to use it in a completely different manner. Star anise is commonly used in Indian rice or curry and it can also be used in baking or in flavouring fruit salads.

Heat oil in a pan and add star anise. Allow it to change it’s colour to blackish brown and add garlic. Let the garlic turn a little brownish and crisp, I like garlic nice and crispy; if you don’t like yours brown or crispy then let it cook only for 30seconds. Add mushrooms, salt, pepper and chilli flakes. Cook on medium flame until the water has evaporated and the mushrooms are cooked.Switch off the stove and garnish with fresh parsley. Serve hot as a side with anything you like! Serves 2.

My tastebuds: I found the flavouring too strong and different from the usual.

The chain of friendship continues and I will be sending secret ingredients to Veena of Kitchen Celebrations and Vidya of The Black Ladle.