I was recently invited to Dakshin, ITC Maratha and without a second thought, I grabbed the opportunity to go and explore one of my favourite cuisine.  Franco-Pondicherry  or Pondicherry cuisine, has been union territory’s best-kept secret. The flavors are mild and the fusion between the French and Podicherry is what makes this cuisine unique and different from rest of India. Meat or fish is sauteed with dry spices and ghee is often used in the cooking. Tomatoes are sparingly used and coconut milk is the base for most dishes. Though seafood is found in abundance, the locals prefer to cook with beef or mutton during festive seasons. Eggplant, drumsticks and mangoes (when in season) are used for vegetarian dishes or mixed with meat and cooked together. Markandam Dalcha (lamb blanquette dalcha) is one such example, recipe from the book “The Pondicherry Kitchen” by Lourdes Tirouvanziam-Louis. Creamy dalcha is a combination of lamb, dal & mango.

The Pondicherry Kitchen is a cookbook which showcases the true authencity of Pondicherry cuisine. I’ve tried 4 different recipes for one of our monthly dinners at Coral from appetizer to dessert. The author’s few notes before the recipe displays some of the best kept secrets of Pondicherry cooking. Each recipe is unique and more profound than the other.

What I also noticed at Franco-Pondicherry fest at Dakshin was that the gravies were treated more like sauces and were much thicker than other Indian gravies. My personal favourite was chicken curry with coriander and mint (kothamalli puthina kozhi kari). In traditional Tamil cooking, tamarind is used as a souring agent but in Pondicherry cusine you will see a distinct taste of vinegar used in their gravies too. Raw mangoes are used in gravies and chutneys for sourness. Desserts served were semolina cake with rose petal basundi and baguette with basundi.  Basundi is traditionally made with thick milk but, this particular one was made with coconut milk –  mild, light and delicious. 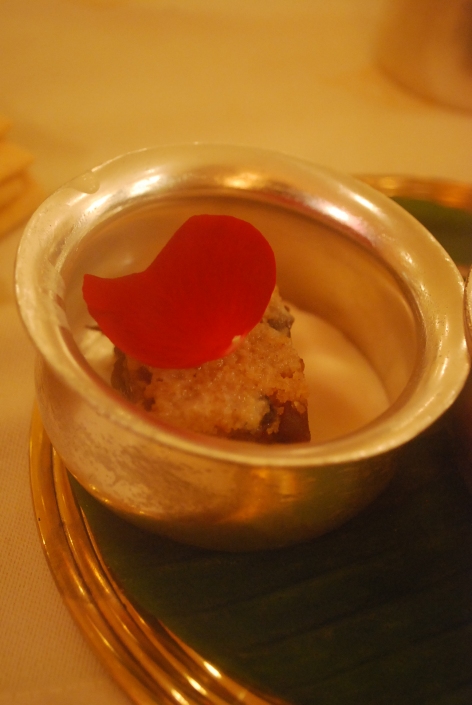 I would like to share a recipe of one of my favourite appertizer from the cookbook – Erral Masala Vadai (prawn & channa  dal fritter). It is an ideal snack for the monsoons and very easy to make.